I bought this mount new in 2009 at the German company Teleskop-Service.  Delivery was swift and without issues. It was targeted to be used with a Maksutov 180mm. The mount performed satisfactory with this telescope, even though it was used for high-resolution imaging. The requirements for this kind of usage are pretty high, since the high magnification of the sensor (ATIK and Philips SPC) in combination with a 2,5x Barlow will show any kind of vibration. Even so manual focussing was possible.

I replaced the motors and the steering with a GOTO system after a few years just for the fun of it and also to discover this ‘new’ way of working. Besides the goto functionality I very much appreciated the more direct response of the system. When tapping the direction buttons the telescope would respond immedeatly, instead of showing a slight delay with the synchronouos drives. Another advantage of putting in this GOTO system was the illuminated polar scope. A drawback of the GOTO-system was the time lost a setting up for aligning the telescope.

The HEQ-5 was also used for grab-n-go with the Startravel 120mm F/5 which was absolutely a rock-steady combination. It performed top-notch on starparties. Further on payload, I also have used briefly the HEQ5 with the C11. It required three counterweights and was at the limit of usable. I would not advice this kind of usage. Let’s say that for short type telescope 15kg is the maximum for visual usage. Long refractors up till 8 kg. </span></p><p>

The big surprise of the HEQ5 mount came only when I started using it for astrophotography. It became quickly clear that this particular mount (there might be variations obviously) was very, very precise in it’s tracking.

Unguided exposures are possible with a focal lenght of 180mm and 3 minute exposures. This is pretty goodl. See the picture below. When the polar alignment is done with care, it will track for minutes with any lens up to 200mm. I’m a happy user of this mount for it’s transportability, it’s precise tracking. That makes it an easy setup for mobile imaging. Power consumption is also very low (300 to 500 mA). Polar alignment is also a breeze, nothing like the old EQ6 system which is in practive unusable

The mount is pretty light, and easy to setup. A portable setup for small scopes of telelenses, with very powerfull tracking capabilities. 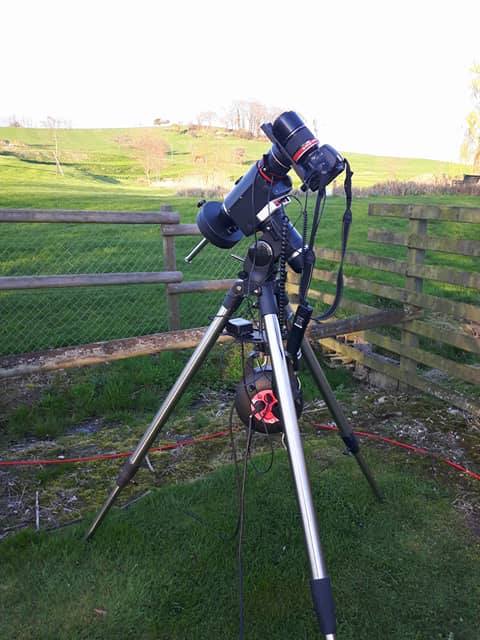